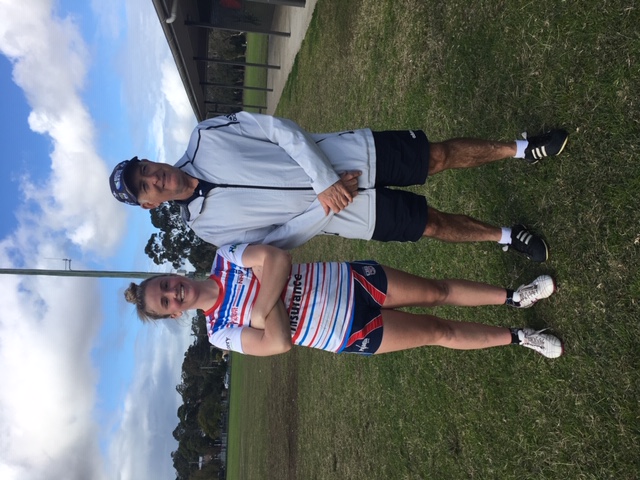 Singleton rugby union talent Sophie Clancy admits she had a blast during her one on one training session with Wallabies legend David Campese.

Local rugby fans are counting down until the Newcastle Wildfires representative teams make their long-awaited entry to Sydney’s premier competitions on July 18.

For the men, Scott Coleman will lead them in the Shute Shield for the first time since the Wildfires briefly appeared in the historic competition from 1995-99.

She looms as one to watch off the back of an incredible 12-month period which saw her guide the NSW Country Women’s Sevens to a national title (named player of the tournament at age 16).

“To play in the Jack Scott Cup is an extraordinary opportunity I am being offered at such a young age and I will use it to gain understanding of a higher level rugby,” Clancy told The Hunter River Times.

“I am so keen to see the standard of skill there is to offer in the Cup and the skills I can learn through the experience.”

Dubois is assisted by Will Scully, a proud mentor of Clancy and many other junior rugby talents across the Newcastle region.

At the end of the squad’s Saturday training session with consultant and Wallabies legend David Campese, Scully was able to grab a hold of rugby great for an exclusive drill.

“So, at the end of the session, David took extra time for me to address my kicking skills and change any flaws that it had,” she continued.

“He told me practice is the best thing for getting better, and that learning left and right would be a unique skill I could take to the Super W which is my current goal.”

Clancy has also held representative honours in rugby league while last year she represented the NSW Rams at the under-16 AFL carnival.

Yet she has proven to be a true rugby girl going forward and described her session with the two-time World Cup winner as a ‘blast’.

“To be around someone who has had such a career like his with the Wallabies was unbelievable,” she added.

“David was a very honest and hardworking guy; he was nice and genuinely showed he wanted to be there and make a difference with women’s rugby.

“I couldn’t have wanted the session to have gone any other way than it did.”