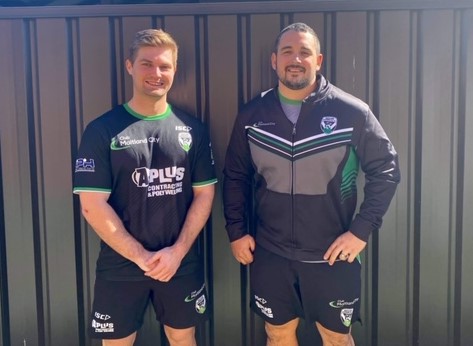 Nieuwenhuise finds form for the Pickers

Both the current Greyhound and former Singleton playmaker James Bradley would help inspire the Pickers to a 30-10 win over the Thirroul Butchers at a blustery Gibson Park.

The Pickers, who remain undefeated in the Sydney based league, will now play Western Suburbs at Maitland’s No.1 Sportsground this Saturday at 3.30pm.

“We are really happy for him,” head coach Matt Lantry told The Hunter River Times prior to his debut.

“He has settled in quite well and an opportunity has presented itself for an outside back on the bench.

“Will then grabbed it with both hands.”

Nieuwenhuise, who claimed Singleton’s player of the year award under Jye Bayley (pictured) in 2019, was due for another successful campaign at Pirtek Park this season.

However he was forced to look elsewhere last month when the Greyhounds opted not to participate in the Newcastle and Hunter Community Rugby League competition.

Now he can say he played in the top tier after three stellar performances in the Newcastle league (with Maitland’s second grade side) while on permit from Singleton.

“He is a very mature and level-headed kind of guy and after just talking to him on Thursday night we knew he’d make the most of the opportunity,” Lantry added.