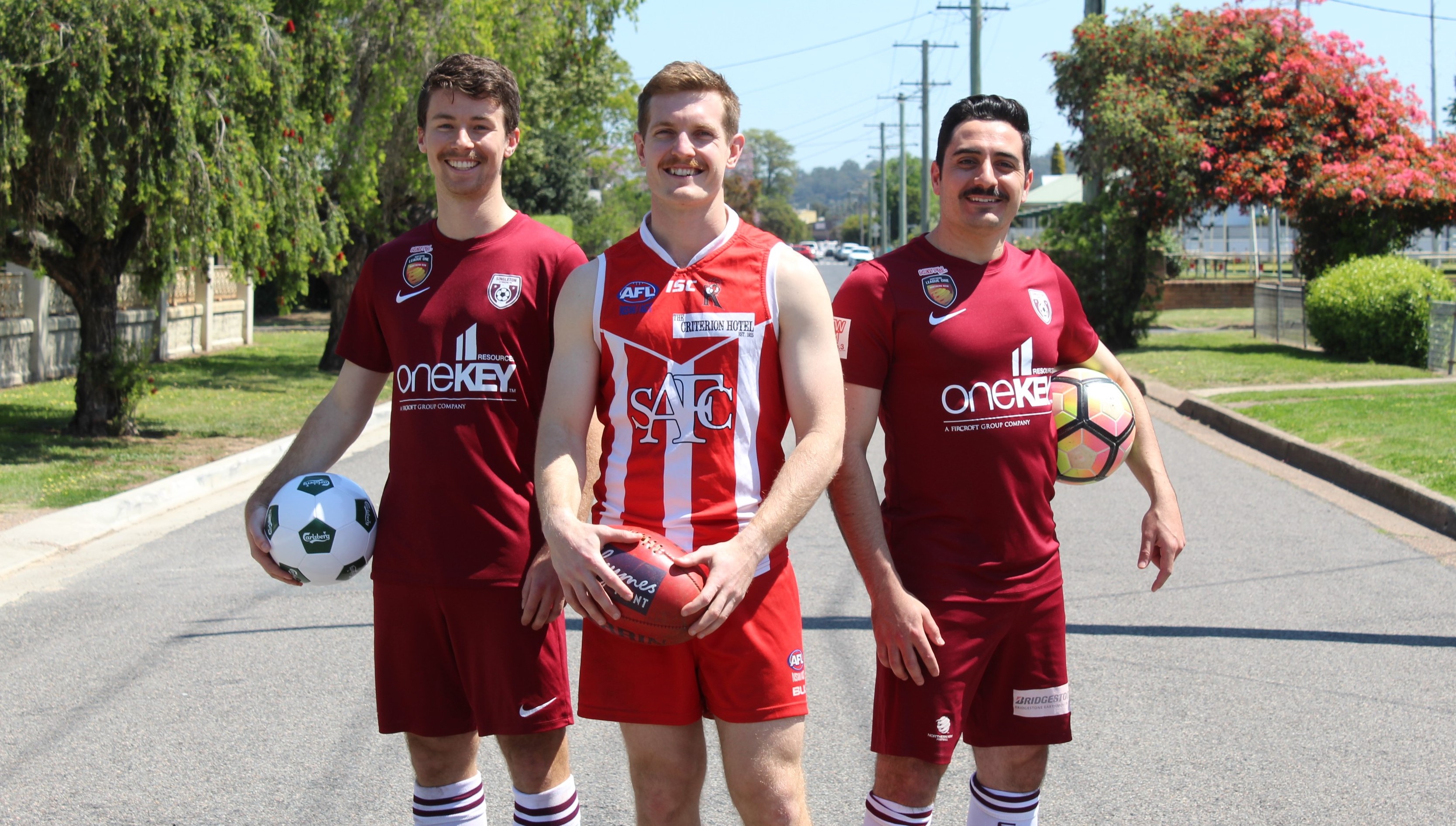 The Three Amigos Aim For Glory

They have only called Singleton home in recent years.

However close friends Cameron White, Hayden Nicol and Joseph Civello will lead their sides to historic finals this Saturday.

If White, who was recently named captain of the Singleton Roosters, can lead his side to victory against Newcastle City in the AFL Black Diamond Cup semi-final then they will take part in their first top tier grand final in club history.

At the same time, round ball duo Nicol and Civello will be featuring in the Singleton Strikers’ first final since 2004 when they play host to Kahibah at Howe Park.

After his match, White will inquire if the Strikers prevailed.

And vice versa, as has been the case every Saturday this winter.

“I think they both deserve a lot of credit for helping build an amazing culture at the Strikers and their talent on the field has propelled the club to where they are today,” White told The Hunter River Times.

“Living with Joey I’ve seen the amount of time he puts in organising team events, helping the committee and also getting down to help train the juniors before his training.”

Civello, now 28, met White, 27, at the University in Queensland when he moved from Mackay to Brisbane. They trained together while White played on the Sunshine Coast.

“Then when I got offered a job down here in Singleton, I moved in with him and lived with him since the end of 2016 until the start of this month,” Civello added.

“Then Hayden and Cam worked together at Bengalla and then Hayden started playing for the Strikers so that’s how we are all connected.”

Civello and Nicol have both helped turn around the culture at the Singleton Strikers who finished in the top two for the first time since 1992.

Yet Nicol, who was named first grade captain last year, admits they suffered many character-building defeats along the way.

“I met Joey the first time I played for the Strikers,” Nicol recalled.

“We lost 6-2 in a trial at Alroy Oval in about 49-degree heat against Mayfield and my brother Lachlan ended up going back to play for Muswellbrook but I stayed on.

“I only met Cam a few times when I came to pick ‘Civ’ up for games but then in early 2018 he came to work at Bengalla where I pretty much taught him everything he now knows.”

This year Nicol, originally from Muswellbrook, started working at Mount Thorley and temporarily moved in with White and Civello.

Coincidentally, it was at this time White was promoted as captain of the Roosters therefore Singleton’s two on field leaders were living under the same roof.

“Haydo made the life decision to leave Bengalla and move to Singleton this year and while waiting for his house to settle we had him live with us a few nights,” White explained.

“Joey meanwhile was the MC at my wedding in March this year so he has become part of our family.”

On reflection, the trio sum themselves up as miners who love their footy.

Yet, in the lead up to both finals series they have proven to leaders on the field, servants to their supporters and role models to the next generation.

All they want now is to play in the big dance.

“For us to both win would be unreal, words couldn’t explain it,” Civello said.

“Not only would it mean a lot for the town of Singleton but personally what it would mean to certain people at the club.

“It would be no less than what they deserve to see some silverware come back to Singleton.”

However, that was in a lower tier.

“Well wouldn’t that be something for Singleton this year if both teams won,” he added.

“Surely since our major sponsors, the Horse & Jockey and the Royal, are across from each other we can get across to acknowledge and celebrate with them if it becomes a reality.”

“An open top bus down John Street would be the only logical option,” he concluded.