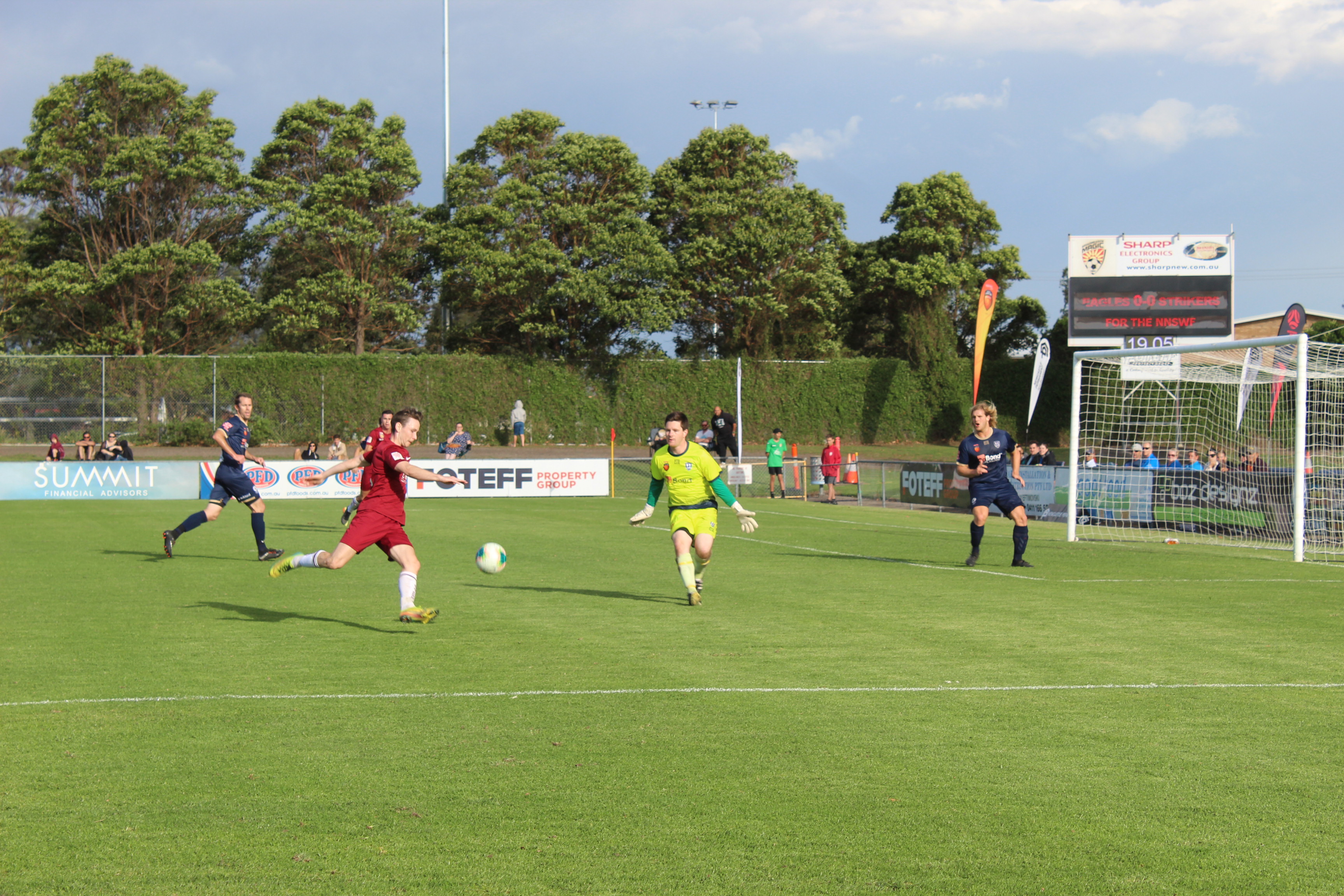 Jake, 26, joined the Strikers ahead of the 2019 season as the club’s sole recruit from NPL side Weston Workers FC that summer.

And he proved worth his weight in gold across his first injury-free 37 appearances for the club.

However, he faced an unexpected hurdle in the opening passage of Saturday’s clash.

“I went in hard at a contest and though I didn’t realise it at the time I tore my MCL,” Jake told The Hunter River Times.

“It was in the first ten minutes of the game and as soon as it happened, I turned to Tristan Muir and said ‘I’ve done my knee’.

“He looked at me, shook his head and said ‘shit’.”

As the vocal 350 Singleton fans continued to cheer, Jake pushed on through the pain.

“I struggled from there, but I somehow was able to run and just did not stop for the boys.”

The spotlight was then cast on his 22-year-old brother moments later who scored the game’s opening goal at the 27th minute.

“There was an 18-yard box, all I had to do was turn and hit it,” Joel explained.

“I had the top left in my mind and luckily enough it went in.”

Joel almost scored the game’s second goal, an own goal deflecting off of New Lambton’s Corey Nicholas at the 67th minute.

The healthy 2-0 lead then sparked wild celebrations from the Strikers’ fans on the northern end.

Jake capped off the historic championship with an incredible goal line clearance from an Eagles corner at the 87th minute.

“I remember asking Lachlan Nicol how long there was to go and he said look at the clock,” Jake reflected.

“I asked, what clock?

“I looked at the scoreboard and I did not realise that there was a clock there and it said there was two minutes to go.

“Tears then started flowing and I said, we have won it and then I was just holding back tears.”

Joel received a hero’s applause when he was substituted off for Dylan Bentley at the 91st minute.

He could not wait to find his partner Ciennah Welsh for a celebratory hug.

“She has been to every game and I don’t think I would have played soccer again if it wasn’t for her coming back,” Joel revealed.

“I was walking through the crowd and I finally found her at the top of the stand, so I had to give her a kiss, a cuddle and say ‘thanks for coming’.”

The Cup would finally return to Singleton and the win would mark another memorable chapter for Muswellbrook’s Barner family.

“Lastly, I just want to say how good is my brother,” Jake concluded.

“He is the best player in the league, best striker, fastest player and nobody has better footwork than him.

“He has had a rough week and he deserves everything that comes to him.”