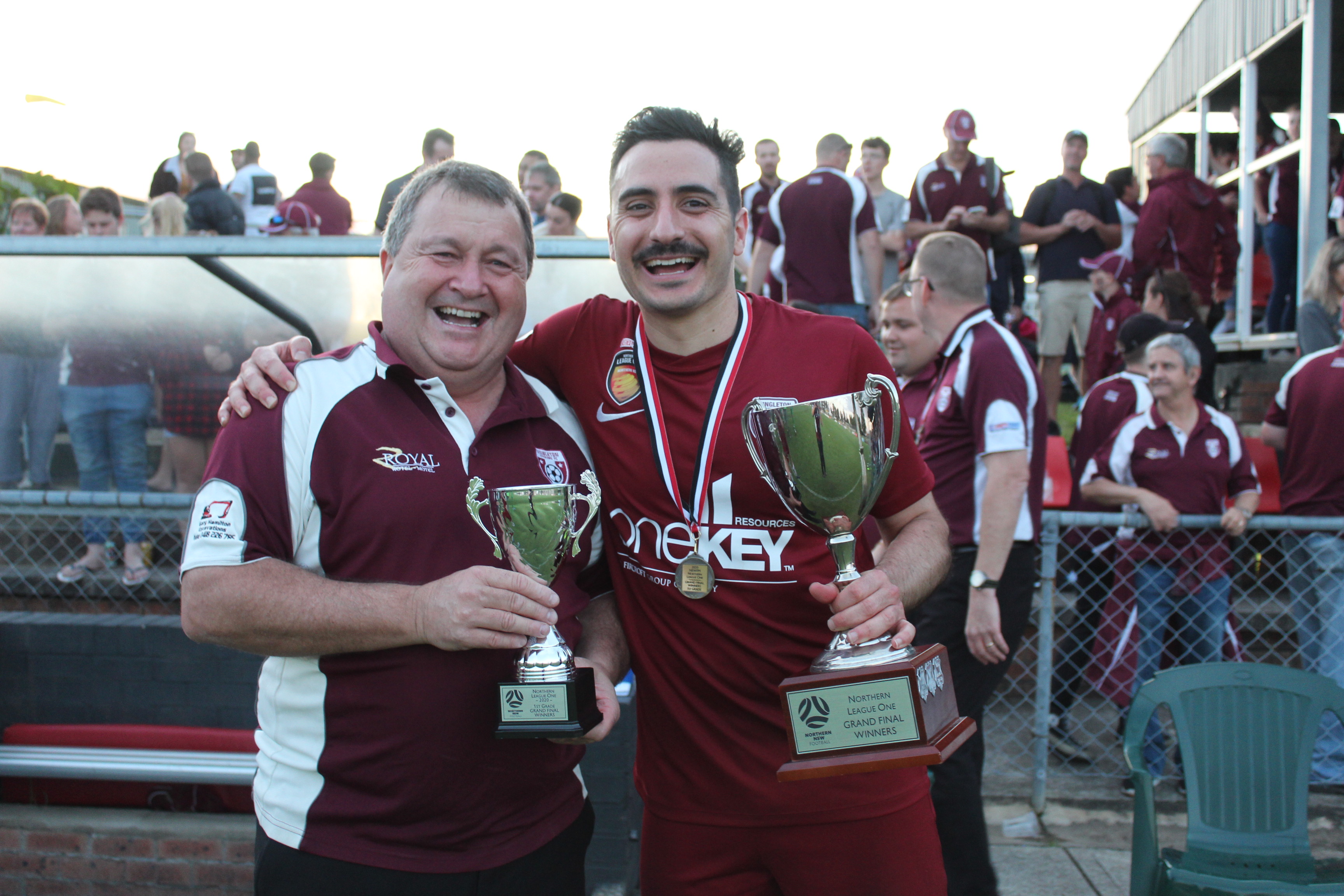 An Old Boys Day worth waiting for

For 10,283 days, Dave Andrews was the only Singleton Striker who had scored a goal in a Northern League One grand final.

Then in October last year, the drought finally came to an end.

The Strikers’ class of 2020 was able to add to the club’s empty trophy cabinet with their second league title thanks to a memorable 2-0 grand final win over New Lambton.

“I have dined out on saying I have kicked Singleton’s only grand final goal for a long (long) time,” Andrews laughed.

“But the time had come to share that honour last year and I think I speak for Warren (Gillespie) and all of the other members from the 1992 grand final side when I say we were glad the drought came to an end.”

This Saturday, the Strikers will mark their final home match against Cessnock with a nostalgic nod to the victorious 1992 grand final side on Old Boys Day.

“We are going to play in a retro strip from 1992,” current striker Joseph Civello revealed.

“These commemorative kits will be auctioned off by Peter Dunn Real Estate with proceeds from the day donated to the Black Dog Institute and, for the second year in a row, Lachlan Nicol has dyed his mullet as part of the ‘Mullets for Mental Health’ campaign.”

Last round’s 3-1 home triumph against Belmont-Swansea saw the Strikers climb from sixth to fourth on the table in what has been a season of mixed results.

A win this weekend will see the side further their chances of playing in back-to-back finals (a feat the club was unable to achieve in 1993).

“We made a few grand finals in fifth and fourth division so when we made it in 1992, we didn’t realise it was going to be the last time we won it for 28 years,” Andrews reflected.

“We didn’t taste success again for so long and you really didn’t savour it.”

Almost three decades after his historic 1-0 win over Stockton, Andrews admits he was ‘as nervous as a kitten’ when attending last year’s grand final at Magic Park.

Two hours later, he let out a sigh of relief.

“It was so good to see after we had been without success for so long,” he continued.

“Juniors don’t want to come through and aspire to be in a first-grade team that face 6-0 defeats all the time which is what it used to be like for Singleton.

“The Belswans used to have pizza night the week after they won and there were many years where they would get off the bus at Singleton and celebrate before the game had even started,” Andrews continued.

“Now this year the boys have defeated them twice and I don’t recall if we have ever done that before.”

Home supporters will be cheering for a Singleton victory this weekend ahead of the line-up’s final away matches against Wallsend, Thornton Redbacks, South Cardiff and ladder leader Cooks Hill United.

Civello found the back of the net in the Strikers’ 1-1 draw against Cessnock in Round 5 this year.

He has also scored five goals in his past four games, his most impressive monthly tally since June 2017, to bring his season tally to eight.

“I’ve still got the hamstring difficulties from last year as well but I’m battling on,” he added.

“I’ve scored a couple in a row which is always nice as a long as the boys are always winning that’s what is important.

“And this week is about leaving a legacy for the club and raising money for mental health which is important for sport and life in general.

“It’s about doing what we can in football to help the community and hopefully that coincides with a win for us.”