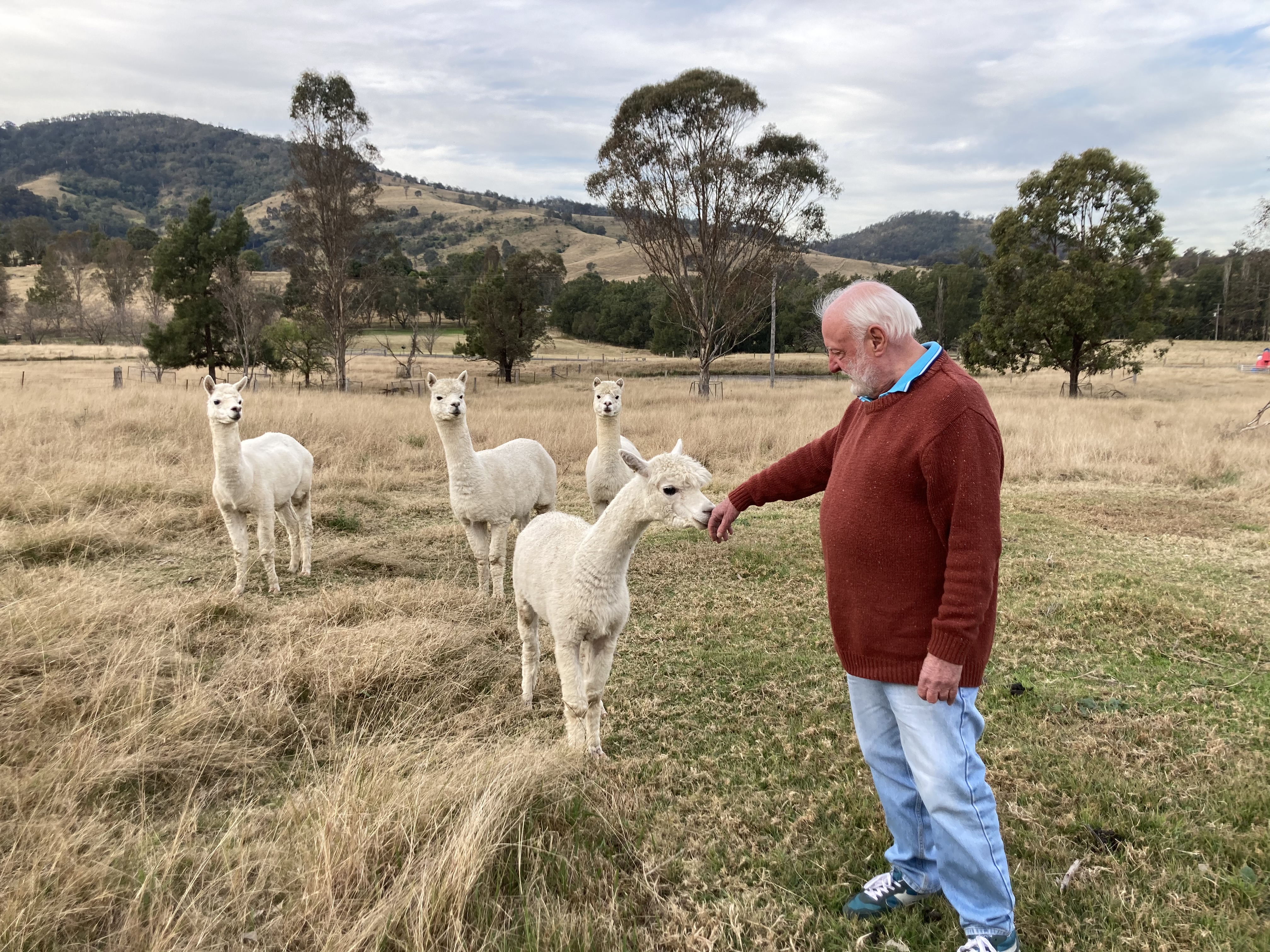 Give Me a Home Among the Alpacas

It was a chance meeting with alpacas that was the catalyst for a tree change for Andrew and Pat Johns.

While Pat sadly passed away a few years ago, the decision to move from city life in Sydney to the country was certainly a shared desire and Andrew remembers quite fondly their first encounter with an animal neither had seen before.

They were at a pet expo in Sydney and the alpacas were part of the show.

“Neither of us had even heard of them and they just captured our imagination,” Andrew said.

They attended open farm days and learnt more about alpacas and soon the weekend hunt began for a rural property suitable for a new lifestyle that involved these inquisitive and entertaining animals.

They wanted a property no more than a three hour radius of Sydney and visited Bathurst, Orange, Stroud, Gloucester and everywhere in between before they came to Singleton.

It was two years into the search and when they came across the perfect spot at Mirannie, just outside of Singleton.

Andrew remembers the day well.  It was a Saturday afternoon and one property that attracted their interest was in the window of three real estate agents.  Only one was open so Pat and Andrew went inside to enquire the address.

“I know now that we should not have gone out there but we did and were met by the teenage kids of the owners, and they showed us around the property and we just loved it,” Andrew said.

“We rang to make an offer on the Monday and said we had been out there and the agent said ‘We Know’,” Andrew laughed.

The price was right, there was good farmland for the alpacas and agricultural enterprises and the house was nice not to mention the spectacular view.

They moved in 1997 and have lived at the property ever since.

Once it was home to 95 alpacas, who were bred to be sold and for their fleece.  These days there are only six remaining and Andrew refers to the paddocks as a retirement home for alpacas.

Despite their age, they are in top condition and Andrew puts that down to their wide grazing space and the capacity of the land to provide their nutritional requirements.

“The shearer who came last year commented that they were in top condition for their age so that is always nice,” Andrew said.

Living 20 kilometres from the Singleton township is no big deal for Andrew but he is amused at home many townies think it is such a long distance.

“I mean really, you can’t go anywhere in Sydney in 20 minutes so it is nothing and it is a lovely drive,” he said.

“I love the space, the neighbours are all a few hundred metres away, it is a good community to live in,” he said.

Andrew’s career is amazing and has seen him work in the high end of travel in Australia, London and Los Angeles and throughout Australia.  He also has had a stint working at the Christmas Island detention centre which was an experience that would require a whole new story for this newspaper.  Maybe another time.

For now Andrew spends his day enjoying his lifestyle as well as providing NDIS support to clients through the HireUp organisation.

“It may not be the best paying job I have ever had but it is certainly the most rewarding,” Andrew said.