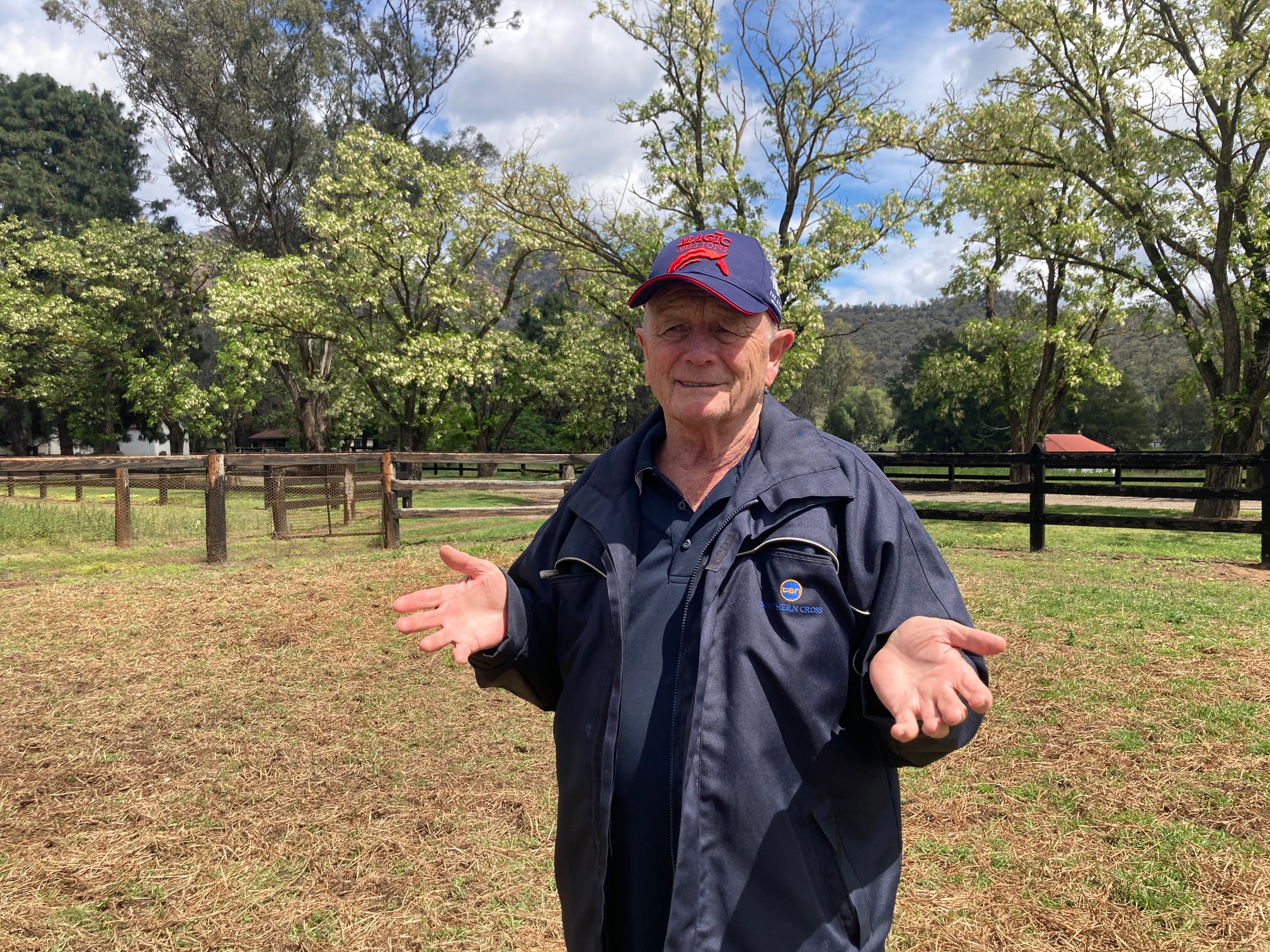 Help where you can, work hard, enjoy life and be thankful and grateful.

After a five-hour interview with Gerry Harvey these are a few messages he shares with readers.

Yes, he is one lucky man and we, at The Hunter River Times were very privileged to have been invited to take a tour with this true-blue Aussie at his Widden property, Baramul.  It is a beautiful 2000 acre property, surrounded by the rocky escarpment.  It was a hiding place for bushrangers and goodness knows what went on the thousands of years before that with the indigenous habitants.  The imagination easily runs wild.

Nestled in between these impressive natural structures is the home of Baramul Stud, the home of some of the most successful racehorses in the country, home of the breeding mares and home of the foals who are yet to take a step on the racetrack. It is also home to around 600 Angus cattle who believe they own the place given their slow, meandering pace on the side of the rustic roadway into the depths of the property.

There are between 1000 and 1500 immaculate mares, many still in foal and others with their foals at foot.  Their breeding is as carefully considered as are their surroundings.  The pasture is lush, the relaxed nature of these magnificent animals is evident.  The touch of a human hand is as natural as the intake of the refreshing whisp of a passing breeze.

As we walked into the paddocks and were welcomed by these majestic animals, you could not help wonder how a life like Mr Harvey’s happens.

For Gerry, who was extraordinarily honest, it is not something he takes for granted.

At 17 years of age he worked, selling food on a Manly Ferry while studying at university.

“Potato chips, ice-cold orange drinks,” he would yell and did once again in front of a stable of a prize mare and her 7-day old foal much to our amusement.

His is a life of fortune, a family who adores him, tremendous business success and a wife who is independently as successful as he, but it is also a life he doesn’t take for granted.

“Yes, I have one of the most fortunate lives, and I know that, and I appreciate it,” he said on reflection.

If Gerry Harvey could call himself anything it would be a horse trader.  Caring and looking after the most magnificent of horses in the world is something that brings him much joy and pride.

Last Sunday The Hunter River Times was invited by Gerry to visit Baramul, a 2000 acre property in Widden and home to 250 racehorse mares and their numerous foals and about 600 Angus cattle.  It is also the place where some 30 people work including farm manager Jamie Crossin and stud manager Paul Thompson.

Many, including Jamie and Paul, live on site.

Gerry cannot have enough praise for both men.  He admires their knowledge and their skill.  Jamie, in addition to his farm management,  can apparently build anything and is in the process of constructing a flying fox bridge across a creek that at times can become a torrent of flood water.

Meanwhile, Peter has all things in hand managing the precious racehorses and cattle on the stud.

Gerry has many things to juggle in his plethora of business enterprises but a phone call to Peter happens most days, especially through the foaling season.  With the care of the most promising mares in Australia in his management, Peter has plenty to do.

Between August and December there can be between one and four foals born a day at the stud and meticulous care of each individual is done under very watchful eyes.

When a mare is due to deliver, she is placed in the foaling pens where two people spot throughout the night, sitting in huts in the paddock, lights on to watch the progress.  Gerry tells us most foals are born during the night so it is essential they are closely watched regardless of the hour.

Two vets live and work onsite, 24/7, ready to step in as the need arises.

Soon after the foal arrives, it and its mother are walked into a protective stable where they stay for a few days, are fed and watered giving them time to quietly recover.

The next step, when they are ready, is to move into another stable attached  to a small paddock where they can spend time together enjoying the outdoor space.

When the time is right, about seven weeks for the foal, they are relocated into a larger paddock with other mares and the foals where they feed of the lush pasture and enjoy the open space.

Gerry gives each foal a ranking, a number out of ten.  He looks at the balance of the foal, the girth, the leg height, the strength but admits that means nothing.

“You don’t know how they are going to go until they race, I sent one to a trainer and it had nothing and then it went to another and won and the origjnal trainer said he didn’t see that coming, it is all a bit of luck.”

The horse racing industry is something, of all things, Gerry loves and since he and wife, Katie, took over the Magic Millions enterprise they have grown the business from a $23million enterprise to $480 million.

Also setting him apart is his sense of who he is, what he has achieved in his life and his passion to make a difference in the lives of others.  He gives others opportunity to make change in their lives, whether it is a job they might not have otherwise had, a scholarship to pursue education or an opportunity to follow a dream.

“At the end of the day I like to think I have contributed something,” he said.

He swears like a trooper and is fully grounded on the fact that he is living a fortunate life.

He says he was born with a strong work ethic, has always been ambitious and keeps his motivation active by doing the things he is interested in, like being a horse trader.

He is now 82, we need to mention that because he told us three times.  He plays tennis three times a week and knows at his age, he is very lucky to be able to enjoy the life he leaves.

“I have been fortunate to have lived in the time I have, I have never had to go to war, I still have good health and if I die tomorrow I know I have lived a life a very fortunate life.”