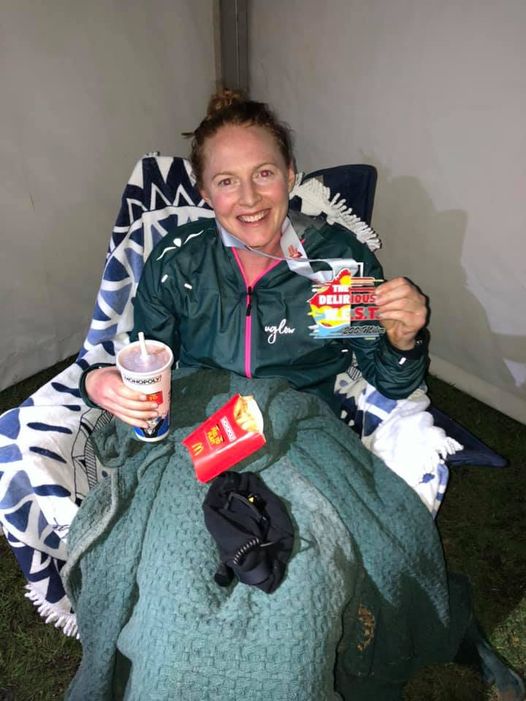 The long-distance runner broke the women’s course record when finishing the 340km race with a time of 69:51:09.

“My goal was to keep around the 5km per hour mark,” Coffey said after the race.

“It was the first time I had run in a 340km race as well so I could not have done it without my support crew.”

She added to her Margaret River Ultramarathon win in May when setting the women’s course record (completing the 80km trail in 8:24:58).

Had 2021 gone to schedule, her next assignment would have been the Surf Coast Ultramarathon in Victoria.

However, the recent covid-lockdown forced the event to be postponed to December.

Therefore she tackled the Delirious W.E.S.T and conquered the feat despite a serious set back on the first night.

“So, I was actually lost for a few hours on the first night and was the first S.O.S callout in the race,” she revealed.

Confusion in orientation from a big marker saw the 28-year-old veer off the track toward scrub at midnight local time.

To make matters’ worse, her phone was down to 4% battery and she was without a portable charger.

Though she tried to find her way back onto the track, she conceded that she was just ‘going in circles’ after several attempts.

“I was prepared to wait out until morning but I couldn’t stay in the same spot because of a risk of snakes,” she reflected.

“So, I decided to climb up a tree, sat there for an hour with my hi-vis vest displayed high and kept a headlight on.”

As the search continued, Meghann’s parents Fiona and David were notified at their Singleton home.

While Fiona admits she is immensely proud of her daughter for winning the event, she was very concerned on the first night.

“I remember saying ‘I know its 1am over there but I’m sorry, Meg’s off track’ because I was very worried,” Fiona told The Hunter River Times.

“A couple of hours later she goes S.O.S and then I thought ‘Oh my God’.”

Then, after 20 minutes of navigating through deep scrub, organisers located her tucked into her space blanket high in the tree.

“I actually had a ten-minute sleep in the tree as well,” Meghann laughed.

When Delirious W.E.S.T officials found Singleton runner Meghann Coffey waiting to be rescued on the race’s opening night, the 28-year-old was very apologetic.

Event organiser Shaun Kaesler said there was no need to be.

“It was a good outcome in the end,” he added.

“I know she was very apologetic afterward, but there was no need because it was perfectly executed (if I’m honest).

“We were stoked with how well the system all worked.”

When Coffey had first veered off track, Kaesler admitted that online officials overseas were among the first to assist while police were also called to her home.

Yet she was back on track an hour later.

In her own words, she just had to see what the rest of the day had in stall.

“Meg kept pushing from then on,” Kaesler explained.

“We worked with Scott (Bunny) and thought that this was going to really mess with her whole psych but now we’ll have a close race…..oh, how wrong I was.

“We met up with Meg at a rendezvous an hour later to reset the tracker and she was flying.”

From that point of the trail she never looked back and only felt slight pain in her quadriceps when reaching the final 60km of the race.

Her sleep routine was unimaginable, combining for three hours and 45 minutes in total which included a 90-minute break at Peaceful Bay and a 12-minute nap in a car.

She also counted 11 snakes across run (seven of which were spotted in a one hour period).

When asked if she had any hallucinations?

“I saw Ned Kelly on the track,” she laughed.

A State of Origin clash may take place next year when the 2020 women’s course record holder Sarah Foster (Queensland) returns for another attempt.

However Coffey will now focus on the Ultra Trail Australia 100km race to be held from May 12-15 in Katoomba.