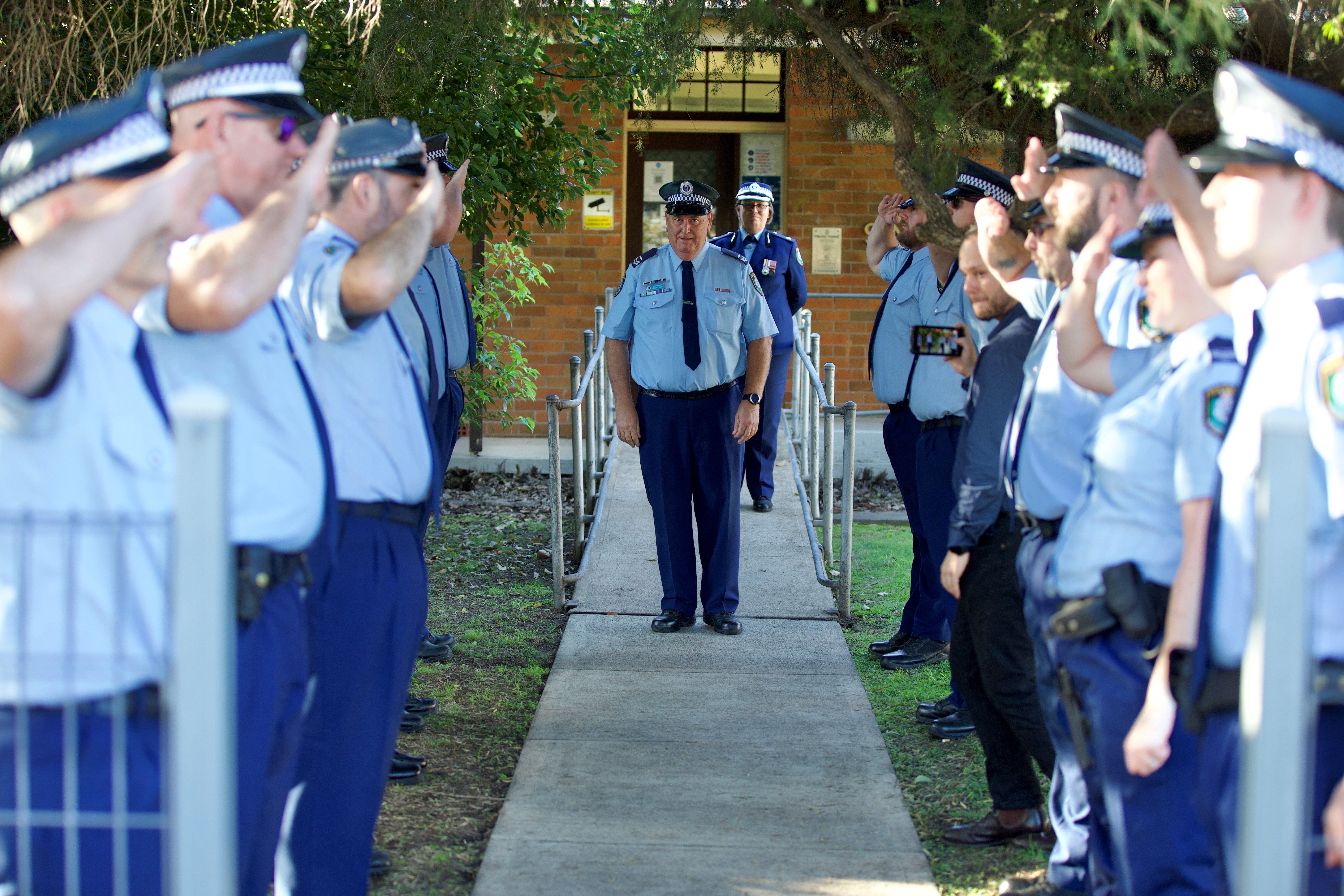 Guard of Honour Says it All

When you see a heavy police presence you automatically associate it with crime.

However, on May 5, this heavy presence of more than 50 men and women in blue at Singleton Police Station and out along Hunter Street was for an event few have had the privilege of witnessing.

The special police guard of honour was for retiring Senior Constable Bob Biles who walked out the of the station for the last time after 38 years enforcing the law.

There were a few tears, even from the big bloke himself who said he never expected such a special send off.

“I really appreciated that send off, I was dumbfounded really, it was unbelievable,” Bob said.

His final steps out of the station were witnessed by many who had worked with Bob over the years along with new officers beginning their police careers.  There were representatives from Singleton Fire Station and local paramedics, many of whom have worked side-by-side with Bob at some of the most horrific and tragic scenes our community has experienced.  The Army band played in the background before Bob was handed the keys to a 1977 highway patrol car which he took for one final lap around the block.

A quick burst of the old siren and the familiar smirk from Bilesy was applauded and cheered.

Bob is described as one of the last old-school cops, a decent bloke whose ability to work with the community was so very much appreciated.

No doubt, it is these attributes that led to a successful 38 years in law enforcement with more tales to tell than this little old newspaper can share but here is a glimpse.

Senior Constable Bob Biles walked out of Singleton Police Station on May 5 for the last time as a police officer.  He received all the bells and whistles of a fond farewell, including a guard of honour which is a very rare occurrence in the police force.

The event itself is rare, the first for Singleton Police Station, and rare for a police officer to fully retire from the force because the emotional and physical demands of the job often results in officers pulling the pin or switching jobs well ahead of retirement.

Not so for Bob Biles and he says he would not change one thing.  He successfully joined the ‘railway police’, better known as the State Rail Authority Transport Investigation Branch and put on the uniform for the first time on May 7, 1984.

The Authority policed on trains, buses, ferries and offered a street level of policing with the power to arrest those behaving unlawfully.

“There were drug matters, a lot of assaults, graffiti and it was dangerous, especially on those old red rattlers,” Bob said reminding readers there were no mobile phones, only radios which were not always effective.

The limitation with the Authority officers was that they could only arrest people on railway (public transport) land and in 1988 the police minister at the time decided he didn’t want two separate policing controls and in 1989 those employed under the Authority were given the opportunity to be sworn in as constables of police.

Bob did just that on October 29, 1989, to enter the police academy at Redfern.  He officially resigned from the railway at 4pm on December 21, 1989 to be sworn into the police force the next day.

He first arrived at Singleton Station on December 5, 1993 and worked between Singleton and Branxton until his retirement.

Born and bred in Wingham, alongside wife Di, the couple were very happy to be leaving Sydney and heading back to the country where they say they belong.

Bob acknowledges the skillset he learnt on those ‘red rattlers’ early in his life gave him a good understanding of how to communicate with people, how to calm a situation.

He has been to far too many car accidents than he can count, hundreds of accidents on the Old Belford Bends and Putty Roads, many fatalities.  He praises the firies, the retained firies for the work they do and the people they help and on many occasions, he was the sole police officer working alongside paramedics and firies at these tragic events.

Bob enjoyed his time at Branxton, operating solely the majority of the time.  It demanded that he increase his knowledge on law enforcement.

“You had to be able to make decisions really quickly but while I was working on my own, the community support has been unbelievable,” he said.

Like the time he was called to the Tattersalls Hotel in Greta where an outsider had a few too many drinks and was starting to cause a ruckus.

“He was arguing with other patrons and with staff and refused to leave and I was called to attend,” Bob said.

“Now this guy was built like a proverbial you know what and I approached him to ask him to leave and I would be the one to throw him out.

“He responded ‘You and whose Army?’”

With that six blokes from the bar stood up behind bob, all locals, and the fellow put his beer down and walked out.

Bob relieved extensively as a Sergeant both at Singleton and Muswellbrook and was considered by his peers and senior officers to be a highly dependable, knowledgeable and experienced police officer.

He has been recipient of many awards over the years including, in 1996, the Commissioners Commendation – Courage and the Royal Humane Society of NSW Bronze Medal in relation to a house fire at Singleton where with Senior Constable Craig Duncan, attempts were made to rescue a 2 year old child who was trapped within a house that was engulfed in flames.

In 2002, he was awarded the Region Commander Unit Citation for initiative and professionalism displayed at Singleton when responding to an incident where a female was attempting suicide.

In 2016, he was awarded the Local Area Commander Commendation in recognition of his resolve, efforts and dedication to duty at a fatal motor vehicle accident at Ravensworth.

For service, Bob has received the following awards: