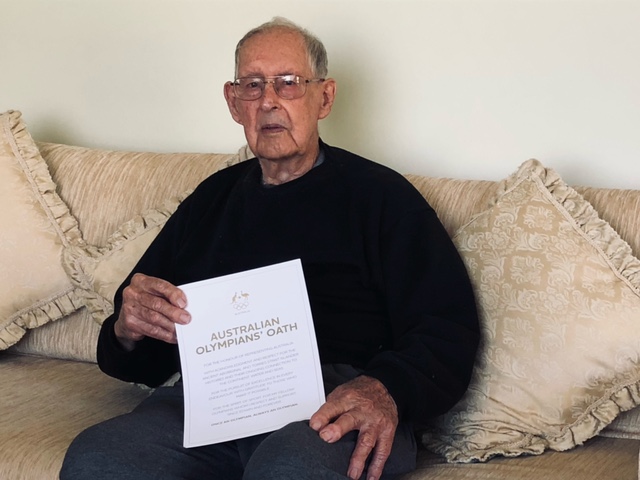 For more than half a century, Kevin Hallett has stood proud as the Upper Hunter’s strongest connection to the Olympic Games.

Yet his journey to the 1948 London Games was not as straight forward as the preparations recently displayed by modern day greats Emma McKeon, Ariarne Titmus and Kyle Chalmers.

He called Singleton home for a majority of his life since his birth on October 13, 1929 at the Fairholme Surgery.

His father Walter Hallett had also been born in Singleton while his mother Martha (nee Williams) came to the region from Queensland.

As a child, he enjoyed his swimming as well as a long list of other sports.

“I wasn’t very much of a good swimmer other than the butterfly, I just swam for fun those days,” Hallett reflected.

“My younger brother (Ron) was the attraction, he could have gone further than I did with his swimming if he wanted to but after his second state title he had enough.”

Swimming may not have been Singleton’s most popular sport in the 1940s.

However, it gained popularity after Gwen Millard participated in the 1938 Empire Games in Sydney (now known as the Commonwealth Games) and finished fourth in the 110 Yard Backstroke final.

It is believed both Millard and fellow swimmer Ken Sever could have gone on to become Singleton’s first Olympians had the Games gone ahead in the early 1940s.

Meanwhile Hallett balanced his time between the pool with his duties as the Singleton Greyhounds’ junior captain throughout his teenage years.

“I played full back in league and I also played two or three A-Grade games for Singleton with Bob Crampton,” he recalled.

“But then an American (Ralph Wright) had come out to show the Australians that butterfly could be used as well as breaststroke so I started putting more time back into swimming.”

In December 1947, Hallett’s new swimming style caught the attention of Australian Swimming Union secretary William Berge (who would go on to be President of FINA from 1964-68) while competing in Maitland.

The following month he enjoyed a successful state championship campaign and by March he was one of 11 swimmers short-listed for the Olympics after he finished in second place in the 220 yards breaststroke and third in the 330 yards medley at the national championships.

Back then, only first place swimmers qualified.

But there was a catch on this occasion.

Only four would be funded by the Australian Olympic Council in the post-war period, the remaining seven members were still eligible so long as they could raise the required £500 pounds of funding to participate.

“I remember returning to Singleton and the club coach said, ‘you have been nominated for the games’,” he recalled for The Hunter River Times this week.

“Then I received the letter that I could nominate if I had raised £500, which was a gold mine.”

Singleton mayor John McGrogan organised a fundraising committee in March and the Singleton Argus published an update on the ‘Hallett Fund’ each week until the target was finally reached in April thanks to Dances organised at the Jerrys Plains and Whittingham Halls.

“People were very generous, and I am still very humbled and overwhelmed by that support,” he continued.

“I was earning 17 and six a week and that wasn’t going to get me anywhere, but I never anticipated the support I was going to get.”

The national swimming team trained in Melbourne at the Richmond 50m indoor pool and was accommodated at the YMCA for six weeks leading into the games.

He then returned to Singleton for a School Ball held in his honour at the N.A.A. Pavilion, the first held since 1941, with 400 in attendance singing ‘For He’s a Jolly Good Fellow’.

“We have done our best (£592) for you and we know that you will do your best for us,” mayor McGrogan declared in his speech that evening.

Two days later he boarded an aeroplane (called ‘Constellation’ which only had a range of 3635 kms) from Sydney which stopped for fuel at Darwin, Singapore, Calcutta, Karachi, Cairo and Tripoli over a four-day journey to London.

He also packed a letter from mayor McGrogan with the best wishes of Singleton to give to Sir Donald Bradman and the Australian team during their second test in the 1948 Ashes series.

As for his Olympic campaign?

Hallett was restricted by injury.

Suffering with tenosynovitis in both shoulders, he was lucky to finish his heat (recording a time of 3:02.0 in the 200m breaststroke).

After the games, the swimming team gave exhibitions at Bootle near Liverpool and in Ireland.

There he won eight events and set a new Irish record for the 100-metre breaststroke, a race that clearly indicated his world standing.

In a letter to his parents, the 18-year-old said that the water was so cold on the Irish tour he would not have noticed if his shoulders were still giving him trouble.

A year later he was selected in the Australian team to contest the Empire Games in Auckland in February, 1950.

He competed in the 200-metre breaststroke but was disqualified due to an incorrect kick.

“There you go, injured and disqualified, that’s my swimming record,” he concluded.

While many of his of Olympic items were destroyed at his childhood home on York Street during the 1955 Singleton floods, he still receives his specially mailed edition of ‘The Australian Olympians’ Oath’ each year which proudly reads “Once an Olympian, always an Olympian.”

Hallett also had a very active part in the operation of the Singleton Bowling Club and has been a winner of the Club’s Pennants Team.

He was awarded life membership of the Singleton Swimming Club in 1986 and is a member of the Hunter Academy of Sport, listed in their Sporting Hall of Fame.

Outside of sport, he spent the next 70 years giving back to the community which had given him the opportunity to represent our nation on the world stage through his accounting business, Service Clubs and the development of the All-Saints Court Senior Residential facility.

But his ultimate achievement was his enjoyment of more than 60 years of marriage with his soulmate Gladys (nee McKnight) who he met at a Dance in Muswellbrook all those years ago.

The pair enjoyed a lifetime of happiness with their children and grandchildren at their Barton Avenue home before moving to Scone in recent years.

In his 91 years and 10 months, Kevin Hallett has proven you don’t need to win a medal or break a record to be considered as an Olympic great.

So, the next time you take a leisurely walk around Darlington and head down Granger Crescent; be sure to tip your hat or increase your speed when you reach Hallett Place.