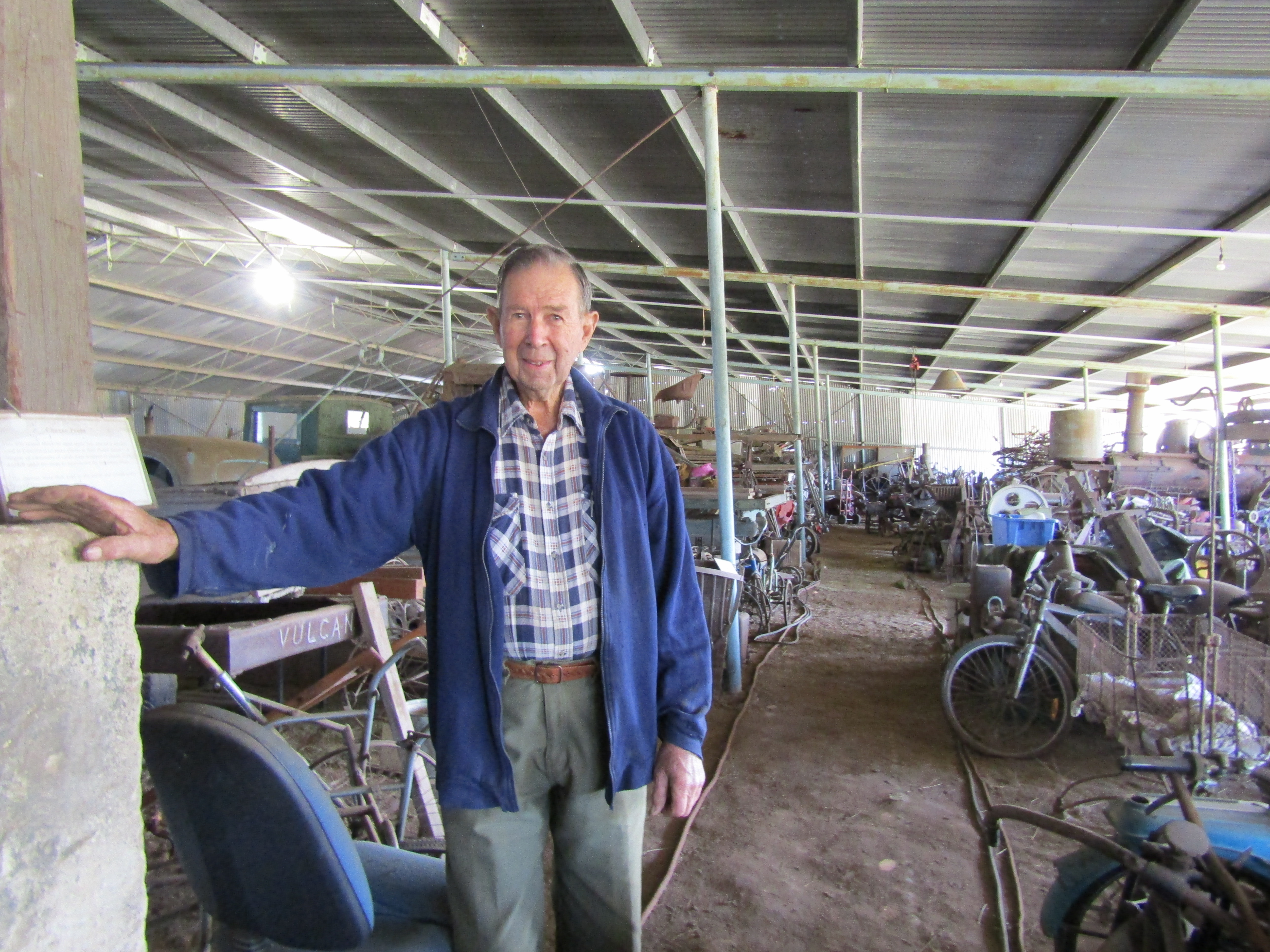 In awe of Jeff’s mind-blowing collection

Jeff Wolfgang’s collection of the past is something that has to be seen to be believed.

His dairy, now cattle, property near Denman is home to one of Australia’s most eclectic, interesting and possibly the largest display of equipment and engineering inventions of European settlement in Austraia.

There are 40 tractors inside the shed, another 20 outside and that’s nothing to what else is in this collection.

Among the thousands of items is Australia’s first mechanical shearing machine that dates back to 1878.

Jeff recovered it from Bourke and tells the story of its initial unwelcomed introduction to the shearing shed that sheared 178,000 head back in the day.

The shearers preferred their traditional method of shearing sheep with their trusty hand held shears so when this new piece of equipment made its appearance into the shearing shed it was met with much scepticism and objection.  The shearers went on strike for two weeks before being persuaded to come back to the shed a little more willing to try the invention.

The new shears were fuelled by an engine run off ropes capable of getting through the fleeces faster and more efficiently.

While the machine agreed with some of the shearers, the rope was known to break from time to time only for the discovery that some of those shearers were known to nick the rope forcing a return to the hand held method until repairs took place.

It is just one of the stories that Jeff delights to recall and every piece of this collection has a story that only Jeff can tell.

There is the water driven kitchen appliance that fuels the cake beaters and the fan and another appliance.  There is the model of what was eventually used at a Mt Thorley farm to open gates without the drey driver having to get out of his seat.

There is even the ceramic toilet bowl believed to have been used by the then Prince of Wales back at the turn of the 20th century when he came to Australia.

There are branding irons, the printing machine form Singleton’s first newspaper, The Budget, motorbikes, children’s toys, tools, farming equipment, wool presses, anything you could ever imagine that existed and some you never knew possibly could.

Jeff finds it difficult to walk past anything of history without attempting to bring it home and this collection is evident of this.

“I just hate seeing things get scrapped, so much of our history just gets pulled down, what’s the point of that?” he questioned.

“I just don’t see the point of throwing anything out when it still has a use.”

Over the years Jeff would have spent thousands of dollars on this collection but he doesn’t question that for a minute.  It is just what he does and nothing brings a spark to his eye more than the mention of a clearing sale.

“You never know what you might find,” Jeff said admitting that it is hard to walk by something he knows has an amazing story behind it.

Justifying his hobby, or addiction, Jeff says he knows blokes who spend $2000 a day on poker machines and to him, and most of us, questions the point of that.

The collection is massive and one he was encouraged to gather at an early age.

His father and mother were collectors so there was already a stockpile of intricate things in store when Jeff became the owner, the only property he has ever lived at.  His grandfather first settle on the property in 1908 when Woodlands sold off some of their land.

Jeff has been talking with Muswellbrook Council for about 20 years about the preservation of the collection and that discussion continues but Jeff is adamant that it must stay in Denman.

“Denman is a town of history, council is doing up the main street, we are the first town from Sydney along the Freeway and the Golden Highway and this is the perfect place for a heritage village, we need a village not just a shed,” he said.

For now, Jeff wonders what the future might hold.

Over the years he has had an abundance of visitors and school students look through the collection but his ultimate dream is to have a permanent home in Denman.

A home is needed for these thousands of items with capacity to tell the story each one holds, to capture the imagination of future generations and to inspire designs for the problems of the future.

Jeff said he was never much good at school, he preferred instead to tinker about on the farm at home.  Jeff would definitely receive a high distinction, a masters degree, and the highest accolades of all academia that ever existed.  Let’s hope this collection is retained in its entirety for the Denman community to own and the broader Upper Hunter to be proud of.