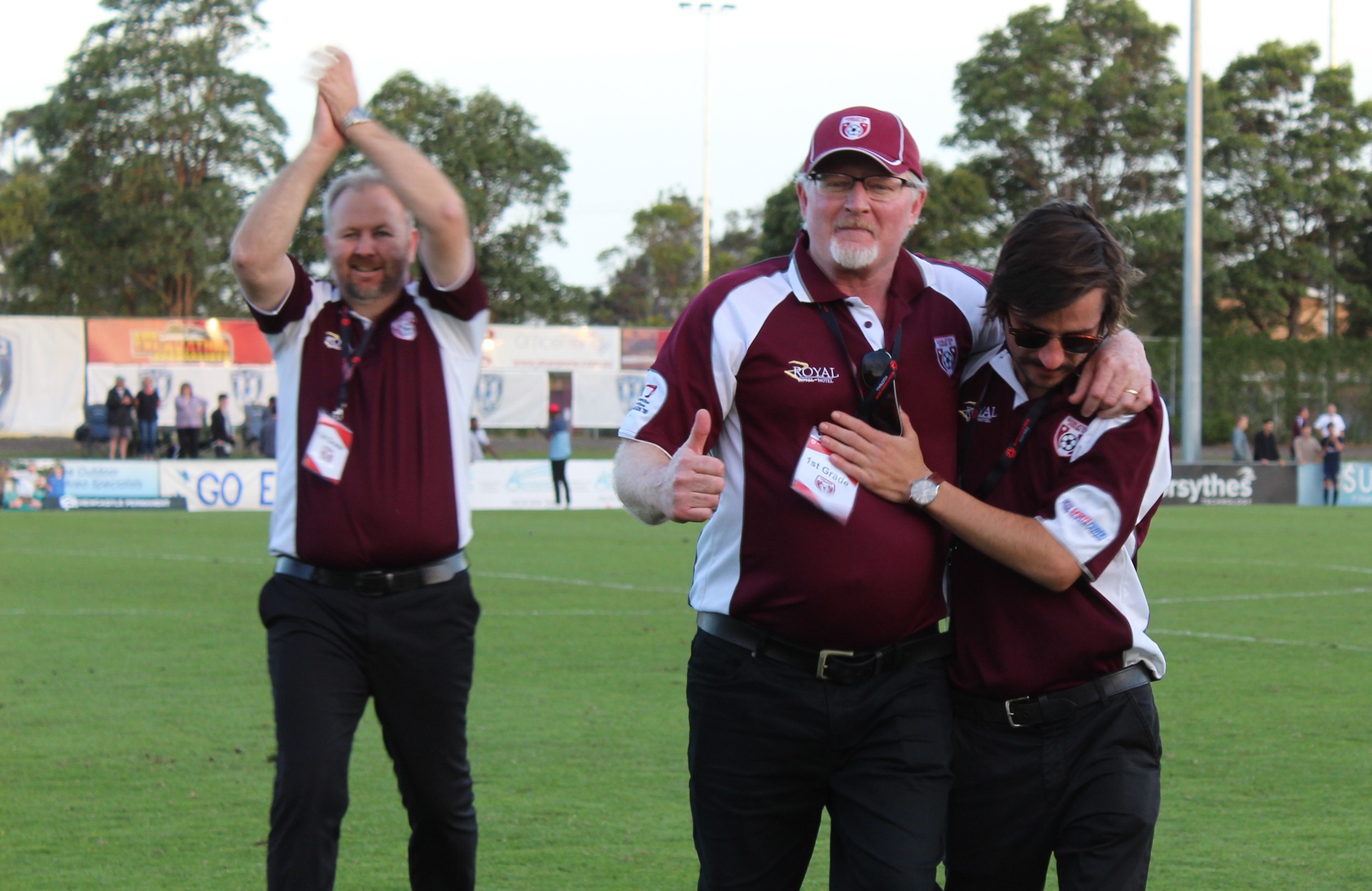 Slade grateful for his Singleton journey

Brendan Slade has called time on his coaching tenure with the Singleton Strikers after two memorable seasons.

Last year the incoming first grade mentor made history when guiding the Strikers to a 2-0 Northern League One grand final win over New Lambton at Magic Park.

It marked the Strikers’ first title since 1992.

That same week he was also recognised with the league’s coach of the year honour.

Less than a year on, Singleton’s inspirational football coach admits he has called time after 31 games due to family reasons.

“That grand final when the final whistle was blown, I will never forget that moment until the day I die,” an emotional Slade told The Hunter River Times.

“I’ll never forget the jubilation and the happiness for the whole town and how every player that has ever played for Singleton wanted to achieve what we did that day.

“We were just so lucky to celebrate that in the first year.”

He reflected on his memorable two seasons as well as his untimely departure from his dream coaching role.

This year the Strikers sat fourth on the table before the competition was cancelled due to the covid-lockdown.

This season they celebrated two impressive victories against modern powerhouse Belmont-Swansea as well as a 2-1 win over minor premier New Lambton.

Supporters witnessed a historic 18-month period of dominance which was a far cry from the Strikers’ previous results against the two powerhouse sides.

“Many other clubs always treated Singleton as a pub crawl where they would go up, win three grades and get blind drunk on ride home,” Slade revealed.

“Some players at West Wallsend even joked about drinking on the way up.”

A former mentor with rival clubs Wallsend, West Wallsend, Cessnock and Belmont-Swansea (he was also an NPL under-20 coach with Lambton Jaffas), Slade will now be remembered for his glorious tenure with the Strikers.

In the three seasons prior to his arrival, the Strikers had only won 18 of their 60 games with 12 draws and 30 losses.

He even managed to rectify his 3-1 defeat to Cessnock on debut in 2020 by celebrating a 3-0 win over the Hornets under lights at Howe Park in his final match.

“I have had a bit of an illness in my family with my mum and her partner,” Slade explained.

“So, I said to the boys and Dunny (Singleton Strikers’ senior president Dean Dunn) that I won’t be able to commit next year and he said he understood.

“I was always going to stay as long as I could and it’s been hard news to share because I haven’t seen any of the boys face to face.

“When they start up pre-season I hope to come up and have a beer with them all.

“Luckily in the group chat, I just let them know family comes first

“They (family) put a lot of time and effort into me as a kid and now it is payback time.”

Slade has wished his successor Mick Jarvis all the best for his campaign as the club’s first grade coach in season 2022.

BRENDAN SLADE’S JOURNEY WITH THE STRIKERS

An early Joel Barner goal would not be enough in Slade’s first official match. The Strikers suffered a 3-1 defeat at Turner Park however showed improvement with a 0-0 result against West Wallsend in Round 2. Then came the region’s first lockdown as players and officials were turned back from training on Tuesday, March 17.

After a 118-day hiatus due to the first covid-lockdown, the Strikers returned to the park with a 5-1 home victory against Toronto-Awaba. Captain Hayden Nicol led the charge with two goals along with Joel Barner, Jackson Cox and Tristan Muir (who turned 21 that afternoon). At the time, we were happy football had returned. Little did we know what was ahead.

Despite a successful season the Strikers were still no certainty to play finals when trailing Toronto-Awaba 1-0 in Round 14. Thankfully, Jarrod Purcell’s goal was matched by a Joel Barner double before Tristan Muir secured a 3-1 win. For the first time since 2004, the Strikers were finals bound.

The Strikers completed the season with a 5-0 win against Wallsend and defeated Kahibah (1-0) and New Lamton (4-0) in the opening finals. Heavy rain saw the Strikers train on Victoria Square and Slade shared some inspiring words with his men. He recognised the efforts of all players including Jackson Cox (who suffered a season ending injury in August).

When the final whistle sounded at 6:46pm, Singleton’s 28-year drought was finally over. Club officials Warren Gillespie and Todd Geddes embraced each other with a hug while Slade ran to the crowd to celebrate with family, friends, supporters as well as past and present players. Earlier, Joel Barner showcased wizardry with his opening goal before the sealer (an own goal) led to thunderous applause. It truly was a Magic Park atmosphere.

There were several songs and chants on repeat from the post-match celebrations which lasted a few days. A rendition of ‘We are the Champions’ could be heard from the Howe Park grandstand on Sunday morning. Fittingly, the chant ‘We Love You Sladey, We Do’ was cheered on repeat from the Royal Hotel to every other celebratory venue and beyond.

While there were many highlights in season 2021 past player and president Dave Andrews was most impressed with his side’s ability to defeat Belmont-Swansea on both occasions (3-1 at home and 4-1 away). Slade cherished both wins, knowing how dominant the Belswans had been over the Strikers during his previous stint at Blacksmiths Oval.