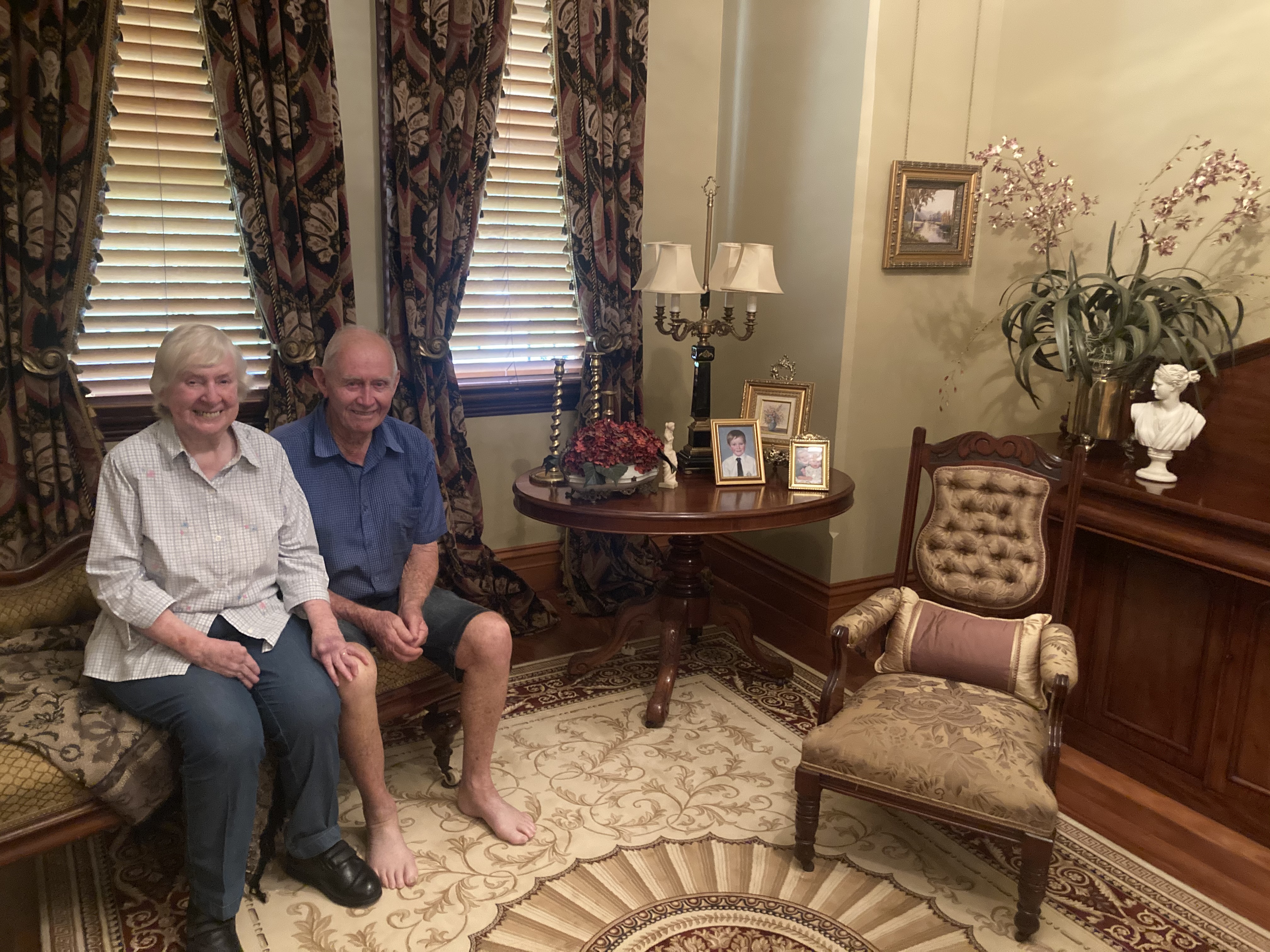 Beautiful, Inside and Out

Get ready for something very special.

Walking through the front door of the property Windrush is a step back in time and a time you can see in all its splendour.

It has been a complete privilege to experience this beautiful home and our heartfelt thanks to its owners, Ron and Joan Stokes, for allowing our The Hunter River Times to walk our way through a most iconic home.

Ron grew up in Gouldsville and Joan in nearby Bulga.  When married they began working on Ron’s parents dairy farm at Gouldville.  Joan’s appreciation of history and heritage is evident with every step this couple have taken over their many years of marriage.

They eventually moved to a property at Long Point to a property named Recluse and it was here that they built a new home that reflected the past.  As one dear friend, June Shaddock said, “You have built an old home new”.

There are many memories of these years but there came a time when the couple needed to step away from the schedule of milking cows and when their accountant, who was also encouraging the milking grind needed to stop, they came across Windrush.

Upon purchase and an imagination largely driven by Joan’s love of heritage, the purchase was secured and so began the restoration.

Windrush was originally situated on the Singleton Hospital site and was moved to its current site  around 1907.

Back to the homes history and the story goes that when Albert Dangar purchased the hospital land in Dangar Road more than a century ago with aspirations of building a hospital, the home, although only partially built was in the way and  through advertisements in The Singleton Argus, it was moved, brick by brick, to the paddock next door.

Although lived in by others, the purchase was one thing after life on the dairy but once the purchase was made, it would  be another six years before they moved in.  Ron and Joan pay tribute to Joan’s brother, Wayne Upward, for his meticulous attention to detail in the restoration project and it wasn’t easy.

The renovation included building a connective room to link the homestead to another wing of the home and it has been done so seamlessly, you would never know if you were never told.

The verandah on the northern wall of the home included the installation of replica columns and iron lacework, the entire surrounding tiling of the verandah features style and design applicable to the era.

It was costly but Ron says, while a little taken aback at the price at the time (around $900 a column), the cost today would be far more and both are pleased with the result.

The exterior of the home is deceptive.  It has been rendered with the result making the property appear as if it is made from sandstone.  The result is pure perfection.

The garden is immaculate and Ron and Joan love nothing more than watching the local birds enjoy a drink and a bath in the massive water feature that dominates the front yard of the home.

While the property is a statement in itself, it is the furnishings that add to the entire experience.

The home is full of antiques, artwork, floral arrangements, family photographs in appropriate historic frames, drapery and carpentry of exquisite design and a dining room table full of notes ready for another book authored by Ron, edited and critiqued by Joan and further edited by their daughter Terri.

But back to the antiques.  Joan said money was a little tight back in those early dairying days and she spent time in op shops purchasing furniture that she took much delight in restoring.  Over the years her purchases grew as did her ability to return these delicate pieces to their former glory.

Now they all have their pride of place in a home people drive past and admire.

This was a home set for a sad demise.  How wonderful that all these exquisite antiques have found a new life in a home that is so very much loved and admired.

This story could go on and on and when originally considering the move to town, Ron wanted to be near the hospital because he was interested in supporting patients inside.  He is the first male member of Singleton Hospital Auxiliary and over time has brought comfort to patients through personal visits.

Such is his commitment to the work of the Auxiliary, Ron dedicated the proceeds of his third book, the sold out ‘Bygone Era’ that tells the story of the dairy carriers of the region, to the organisation.

The books he has written has been a joint effort between Ron and Joan and adds to the enjoyment of life for both and their words have brought extended joy to those who read their words.

No doubt, their inspiration comes from the surroundings in which they live.  Windrush is an environment that captures the imagination of bygone eras, the beauty within every corner of their home takes your breath away, it inspires creativity and a simple love of life.

Windrush is definitely not for sale if Ron and Joan have anything to say at this point in time.

Speaking on the behalf of Windrush, thank goodness this home found this incredible couple.